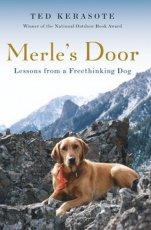 Lessons from a Freethinking Dog
By Ted Kerasote
Published by Harcourt
Buy from:

Merle and Ted found each other in the Utah desert. Merle was about ten months old, surviving on his own, and looking for someone to hang his heart on. Ted was forty-one, liked to write about animals, and had been searching for a pup whom he could shape into a companion. The training went both ways. Ted showed Merle how to live around wildlife, and Merle reshaped Ted's ideas about the complexity of a dog's mind by showing him how a dog's intelligence could be expanded by allowing it to make more of its own decisions.

Acting as Merle's translator, and using Merle's life and lessons as a door into the world of dogs, Ted Kerasote takes us on the journey they shared. He explores why the dog-human bond is so intense and how people and dogs can communicate readily with each other. He also uses the latest wolf research -- showing that wolves treat maturing pups as partners rather than as subordinates -- to explain how sharing leadership with your dog, rather than being its alpha, can help to create a healthier, more self-reliant, and better-socialized companion.

Funny, fascinating, and tender, Merle's Door is a moving love story that reveals how the partnership between dogs and humans can become far more than we have imagined.