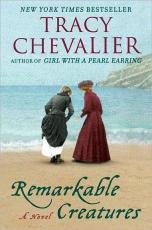 A Novel
By Tracy Chevalier
Published by Plume
Buy from:

From the moment she's struck by lightning as a baby, it is clear Mary Anning is different. Though poor and uneducated, she learns on the windswept, fossil-strewn beaches of the English coast that she has a unique gift: "the eye" to spot fossils no one else can see. When she uncovers an unusual fossilized skeleton in the cliffs near her home, she sets the religious community on edge, the townspeople to gossip -- and the scientific world alight with both admiration and controversy. Prickly Elizabeth Philpot, a middle-class spinster and also a fossil hunter, becomes Mary Anning's unlikely champion and friend, and together they forge a path to some of the most important discoveries of the nineteenth century.