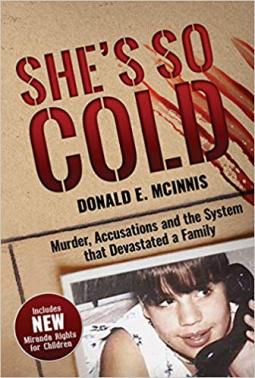 Murder, Accusations and the System that Devastated a Family
By Donald E. McInnis
Buy from:

In the winter of January 1998, the small town of Escondido, California, was horrified when the body of 12-year-old Stephanie Crowe was found brutally murdered in her own bedroom. The police used psychological manipulation to force three 14-year-old boys to falsely confess to the murder. She's So Cold traces the twists and turns of a real-life mystery which eventually changed the lives of fifteen people and cost a district attorney his job.

To protect children and teens from such manipulation in the future, McInnis proposes a new Children's Miranda Rights Warning and a Bill of Rights for Children who are being questioned as suspects. These proposals must be adopted in order to prevent minors from making false confessions that could destroy their futures.

She's So Cold is the story of a broken system. A system stacked against families and, most of all, against children.