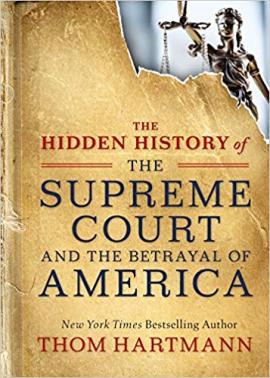 Thom Hartmann, the most popular progressive radio host in America and a New York Times bestselling author, explains how the Supreme Court has spilled beyond its Constitutional powers and how we the people should take that power back.

Taking his typically in-depth, historically informed view, Thom Hartmann asks, What if the Supreme Court didn't have the power to strike down laws? According to the Constitution, it doesn't. From the founding of the republic until 1803, the Supreme Court was the final court of appeals, as it was always meant to be. So where did the concept of judicial review start? As so much of modern American history, it began with the battle between the Federalists and Anti-Federalists, and with Marbury v. Madison.

Read an excerpt from The Hidden History of the Supreme Court and the Betrayal of America here.