The Opposite of Loneliness 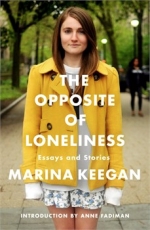 Essays and Stories
By Marina Keegan
Published by Scribner
Buy from:

An affecting and hope-filled posthumous collection of essays and stories from the talented young Yale graduate whose title essay captured the world's attention in 2012 and turned her into an icon for her generation.

As her family, friends, and classmates, deep in grief, joined to create a memorial service for Marina, her unforgettable last essay for The Yale Daily News, "The Opposite of Loneliness"